How do You Separate Pumpkin Seeds From Pulp

Source: Longer - Nut Processing Solution Provider
How do You Separate Pumpkin Seeds From Pulp ? The pumpkin seeds shelling machine will show you the shelling process. The raw material (pumpkin seed) is sent into the hopper, and the screw elevator is used to lift it to the cleaner. The raw material is cleaned before it is peeled, and then the oats are pre washed into the bucket elevator, and the bucket elevator is peeled to the peeling machine. After the shell, the mixture of the shell, the seed and the kernel will fall on the core separator of the shell to separate the seed and the seed out of the shell. Through a cyclone separator, the shell releaser discharge all the shells. After removing the shell, the seed and the kernel are transported to the seed separator to separate the seeds from the seed. After separation, the grain moves forward to the separator for separation, and hard grain moves back to the bucket elevator, and then to the hulling machine shelling, and then enter the core-shell Valley separator seed and shell kernel separation. It has entered the material separated from the separator. First, the small shell is removed. Then the fine separation will be discharged and collected by the discharging bin, and the kernel and the core will return to the entry of the material return device, then re separate and separate again. 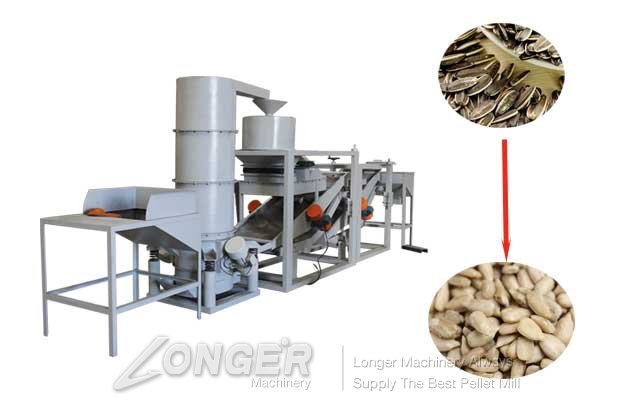