Source: Longer - Nut Processing Solution Provider
Shelling machine is nut shelling machine screw bar, bar, concave, fan.
Working principle of shelling machine: Pour the raw material into the machine, due to the rotation of the paper plate and the rolling force between the concave plate of the fixed grating, the nut shell is separated from the shell, at the same time through the grid network, and then the wind will blow off most of the nut shell blow machine through the wind channel, And yet a part of nut and nut fruit peel together into the proportion of sieve, after heavy screening, nut by separating sieve surface upward, through the mouth into the sack, but not peeled nut (small fruit), from the screen down, after crossing into the material hoist, a hoist the two gate into the fine lines after the shelling, the proportion of branch sieve separation, can be stripped of all. 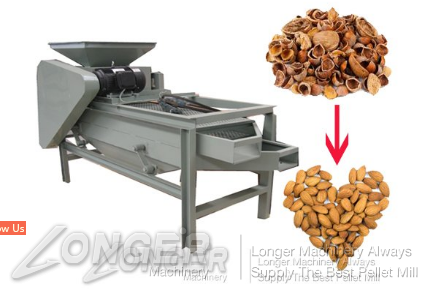 Longer’s Nuts Shell and Kernels Separating Machine Mainly for the almond shells, walnut, separation between shell and kernel, using shell and kernel weight and suspension velocity of different characteristics, with the help of the airflow through the particle clearance money make separation between shell and kernel, due to the small proportion of almond and apricot shell gap, different varieties have big differences, the kernel and shell weight gap separation effect is good, small gap separation effect is poor.General varieties separation rate of 90-95%.
1.Grading machine is used to grade almond into similarly size, then can increase shelling rate.
2.Shelling machine is professional used to broke the hard shell of apricot.
3.Kernel and sheller separating machine can separate the shell and kernel totally. It is very easy to operate, just need to input the material, and shells and kernels will come out respectively. 4.Peeling machine can be used to peel the skin of soaked almond, or peanut, broad bean and other beans or nuts.
5.We still have almond slicing machine, almond strip cutting machine, almond roasting machine, almond butter machine and other almond processing machine. No matter you want to the whole almond processing line or each of them, please fell free to let us know.