Source: Longer - Nut Processing Solution Provider
Castor seed shelling machine has very similar shelling functions like other nuts shelling machines. Light caster shells are blowed out by airflow from inner shaker tables. Other kernels and castor seeds mixture are going to be separated by gravity tables. Our castor shelling tools can process castor seeds in numerous size at one time. Castor seeds are cracked in numerous gap and stress. Unshelled castor beans will flow to upcoming sheller to be cracked once again. Various and repetitive cracking techniques assure a 100% shelling rate.

In view on the fact that castor seeds are compact in size and very little clearance between shell & kernel, we design this shelling machine with low frequency which can improve the shelling price and at the same time reduce broken kernel charge.

We adopt the negative pressure vibrating separator to sort out all the shells, and discharge the shells out through shells-discharger.Our kernels separator combines gravity separation with vibration to achieve the percentages of seeds in final kernels is less than 1%.Easy operation, high automatic degree, safe and reliable.The unshelled seeds after first round of shelling is going to be lifted by elevator to de-hullers for re-shelling.An optimum tools for large-scale, little and medium-sized enterprises who are in oil crushing industry with castor bean kernels or in pharmaceutical industry made of castor bean shells or husks. 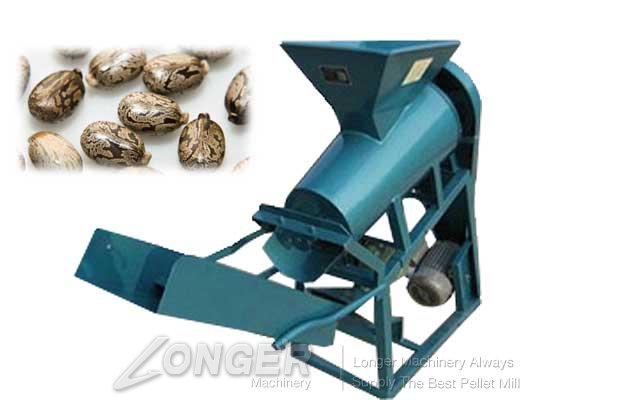