Source: Longer - Nut Processing Solution Provider
Cashew nuts, also known as cashew trees, cashew chicken, fruit, Jieshou. Evergreen tree, the trunk erect, up to 10 meters. It is a kidney-shaped cashew nuts, Sapindales Anacardiaceae cashew. Is rich in nutritional value, it can be cooking, but also for medicinal purposes, one of the four world famous dried fruit. Its edible part of the students in the kidney-shaped top portion of fake fruit, about 25 mm from gray to brown (the color white person found if selected, may bleach, do not buy), shell hard, wrapped inside seeds, sweet syrup, containing a higher heat, the heat is the main source of fat, carbohydrates and protein followed. It is native to the Americas. 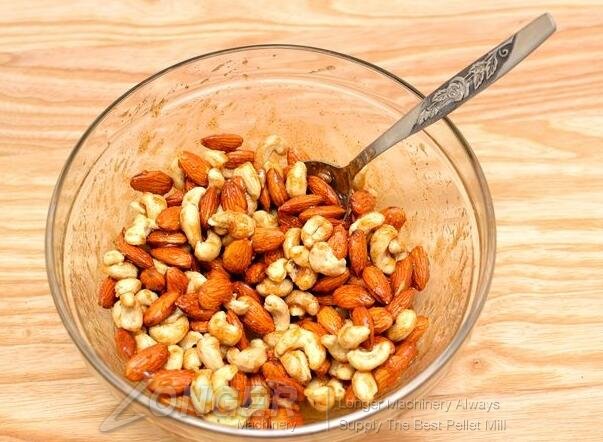 Native to northeastern Brazil within 10 ° latitude. The introduction of the 16th century in Asia and Africa, is now available throughout Eastern and South Asian countries. The world's cashew acreage larger countries are India, Brazil, Vietnam, Mozambique, Tanzania. Cashew highly adaptive, is thermophilic, strong positive species. Resistant to arid, with some wind resistance. In an altitude of 400 meters below the growth is appropriate. Less demanding on the soil, in addition to poor development of the heavy clay and limestone, the soil organic matter content of less than 1% of soil, sand or soil can grow to Rock Hill.
Cashew not cold, at very high temperatures during the growing requirements. January average temperature of 23-30 ℃ flowering was normal, 20 ℃ slow growth below 17 ℃, vulnerable to cold damage, less than 15 ℃ is seriously injured died. More than 2000 hours of sunshine, annual precipitation 1000-1600 mm with more appropriate. Should not be planted in the rainy season, the water table is too high or water areas. Flowering avoid rain.
Blooming usually in the early rainy season. 4-5 age 5 meters Tree Roots main, lateral root development, lateral roots up to 6 mature trees about 7 meters. 2 years after planting flowering, the results of three years, eight years into the flourishing fruit period 15--25 years.
When you roast cashew nuts,assuming you prefer them salted, the question id how to get the salt to stick.
Coating the hot cashew nuts with a little oil allows the salt granules to cling. Roast the nuts on a middle rack for about 20 minutes and then spray the nuts with the brine, stirring one or twice, and return them to the oven. Today we suggest this multi-purpose Continuous Roasting Machine perfectly for roasting cashew, almond, peanut, sunflower seeds, sesame seed,etc